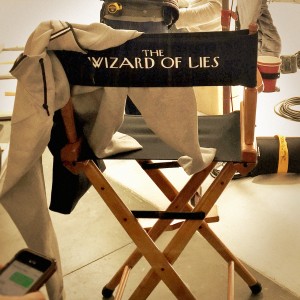 The road to my HBO film debut (playing myself in its adaptation of The Wizard of Lies) began with coffee with the executive producers in mid-July 2015. After our long conversation, they suggested to Barry Levinson that I should be asked to audition to play myself in the scenes where a character named “Diana B. Henriques” interviews Madoff in prison. I got the call a few weeks later: Would I consider doing a screen test for the role? Of course, I would! After a second audition and discussions about the filming, I got the part.

It is surreal to play oneself in a theatrical environment. Dick Cavett had a wonderful reaction to that experience — you can read it here. The challenge is not to “play” oneself but to just “be” oneself when everyone else is playing a role. But scary as it is — and accepting that I could wind up on some cutting room floor — this once-in-a-lifetime chance was just too exciting to pass up!