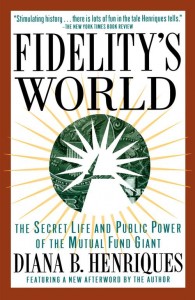 The Power of Fidelity:

“By early 1995, Fidelity had more than $400 billion under its control — in mutual funds, corporate retirement plans, insurance programs, and private partnerships — in the United States, Europe, and Japan. It was one of the largest investors in the securities of bankrupt companies, so powerful that it virtually dictated the terms under which both R.H Macy & Company and Federated Department Stores were reorganized after their respective bankruptcies — and then almost single-handedly brought about the merger of those two chains to create the biggest retailing empire in the country. Fidelity had become one of the largest stock-trading operations in the world, through a discount brokerage service that was second in size only to that of Charles A. Schwab. Through its private venture capital operation, it held a stake in countless small businesses, including a chain of art galleries and an executive recruiting firm. It owned a collection of small newspapers in Boston, and a glossy magazine that covered the investment world. It was the largest property owner in downtown Boston — and the biggest beach will fund company in the world. And it remained private, entirely in the control of one intensely secretive man, Ned Johnson.

Not since the days of the robber barons, and perhaps not even then, had so much money — other people’s money — been controlled by a single individual. It was an arrangement that, inevitably, would change the financial face of America.”

The Birth of the Modern Mutual Fund:

“Between 1923 and 1925, there were a number of bright, creative young men working on State Street [in Boston] who were fascinated by the possibilities of “prudent speculation” in common stocks and by the challenge of offering safe ways for average Americans to participate. The youth tinkering of these men would give rise to one of the most important financial innovations of the century — the modern mutual fund….

By 1924, a new idea was buzzing around the brokerage offices of Boston: a pooled investment vehicle that would differ from a British-style investment trust in two crucial ways. It would issue only common stock, so that the shareholders owned the underlying portfolio free and clear, without any obligations to bondholders. And it would redeem its shares itself, on demand, at a price strictly determined by the per-share value of its portfolio…

As early as December 1923, three aristocratic young friends were already gathering for intense luncheons at the restaurant of the old Parker House hotel on School Street….The organizer was Paul Cabot…who had been exposed to the British concept of investment trusts during a nine-month stint in England earlier in 1923…In early 1924, the young men decided to incorporate…the State Street Investment Corporation. However, they didn’t get around to filing the incorporation papers until July 1924.

By then, another group of young financial Edisons had already emerged from the laboratory with what today claims to have been the first modern mutual fund, the Massachusetts Investment Trust.

The catalyst for the creation of this pioneering mutual fund was a breath of fresh Midwestern air named Edward G. Leffler.
Leffler, of Swedish descent, was the son of a Milwaukee railroad worker….Inspired to campaign against Demon Rum as part of the nationwide temperance movement, he proved to be a spellbinding speaker and a natural salesman. In 1918, after a lackluster series of jobs in the Midwest, he journeyed east to Boston to work as a securities salesman on State Street, where he labored without much success for the next six years…

Perhaps his social isolation during those six silent years gave him a clearer vision of what Americans truly needed from Wall Street….He concluded that what the average American needed was a pooled investment vehicle that was professionally managed, that was diversified to reduce risk, that kept its costs “within tolerable limits,” and that would redeem its customers’ shares at any time. Leffler believed that what American needed was the mutual fund. But would anyone in Boston agree with him?”